The Utility Reliability Driver presents information on CAIDI, SAIDI, and SAIFI reliability metrics as reported by the Energy Information Administration between 2013 and as the EIA reports it. This includes both FERC-regulated and non-regulated utilities across the United States and can be narrowed by state, ownership structure, and year.

There are three main metrics that this driver visualizes, each are defined and contextualized below along with the other factors that may be included to calibrate the metrics.

There are also several additional metrics included in the analysis that calibrate CAIDI, SAIDI, and SAIFI based on customer needs. These are described below:

There are two measurement standards that are reported to the EIA: IEEE and all other standards grouped into one. IEEE (Institute of Electrical and Electronic Engineers) maintains strict standards to measure CAIDI, SAIDI, and SAIFI that may differ from other regional or international standards. Most utilities follow this standard and it is the FERC's preferred standard. You will find a complete document on the methodology of the standard here. The "other" category as reported to the EIA also uses CAIDI, SAIDI, and SAIFI but may use slightly different thresholds to create those metrics. You can filter between these methodologies in a drop down filter in the driver at the top of the screen.

If you are still confused on what these metrics mean for you, it is recommended you go to the Energy Information Website where more documentation is available. You may also watch the video below created by the EIA that explains these reliability metrics.

The Utility Reliability Driver visualizes the data from the EIA to easily compare metrics on any utility across the country. The analysis is intended for electric analysts to assess performance on how reliably an electric utility can deliver and maintain electric services, and benchmark their performance against any other utility in the country. 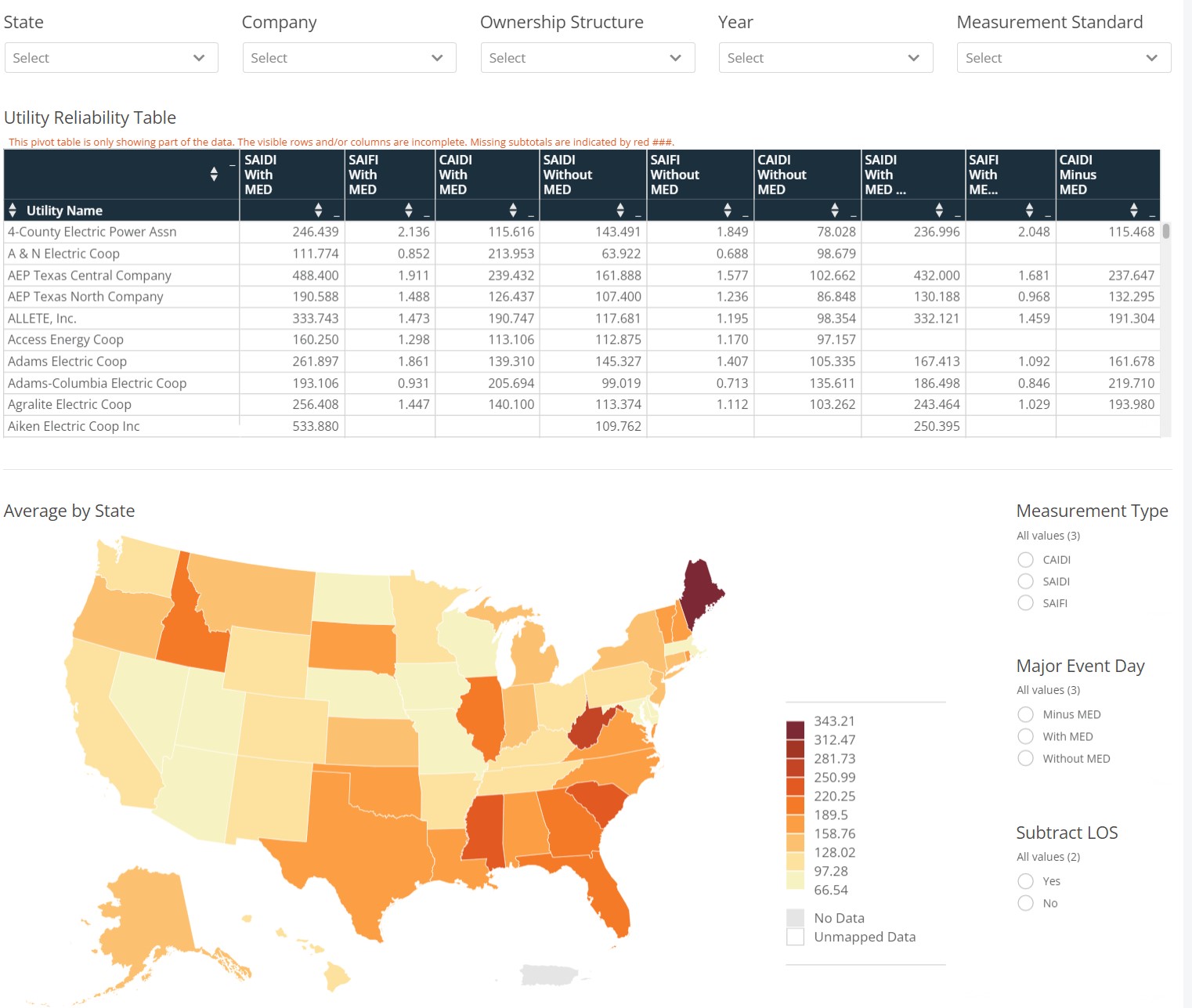 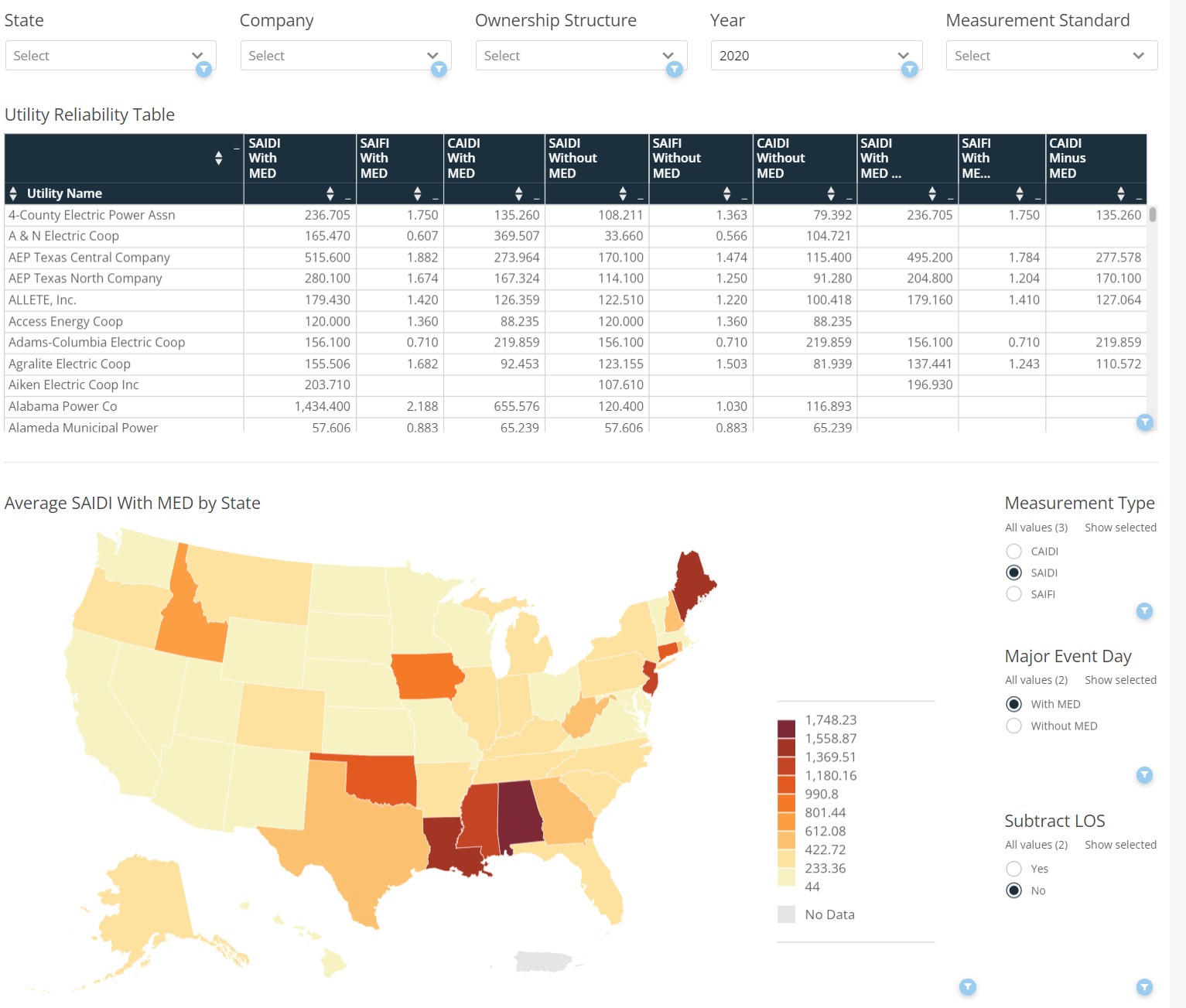 We now see all metrics for 2020 highlighted on the map and the table listing utilities. The map averages all companies in the state. You can select additional factors such as the "Measurement Type," "Major Event Day," and "Subtract LOS" to calibrate the reliability metrics on the map (these button filters DO NOT impact the table where the filters at the top of the screen impact all data in the driver). Let’s dive into a particular company and take a look at AEP Texas North. Click on that company name in the table to drill down into a visualization of their metrics over time. You may need to clear the year filter if you only see a few dots on the screen.

We can now see the metrics in a chart by reliability measurement. In order to select a new company, click on the back arrow next to the title of the chart, and it will take you back to the table view. As a general rule of thumb, it is advised to filter to a particular year first, then Ownership Structure or State in order to keep the driver functioning seamlessly. There is a lot of data feeding into the driver and casting too-wide of a search criteria can slow down the experience.

There are several ways in which the driver can be exported. A visual export of the driver via PDF or PowerPoint can be generated via the export button (

) at the top-right corner of the driver. Data can be exported via each card on the driver. To export data, move your cursor over the card/table and another export (

). The expand details icon will give you a screen as seen below.

at the top-right of the pop-up will show you the data feeding into the visualization.